After a dozen years of ignorance, in 2018 Old Rope finally discovered the history of Nereci. Not merely the name of an unrequited love interest in a ballad by Brazilian funk singer Djavan, Nereci is in fact a powerful spirit and queen of the sea. Much cooler than the average ex who dumped a muso, right?

I might have learnt about her true provenance faster had I known her by her more common name: Yemanjá (or Iemanjá), a central figure in various religions of the Black Diaspora of Latin America. In Brazil she is one of the seven Orixás (or godlike spirits) in the syncretic Afro-Brazilian religion called Umbanda. Look I’m doing learn-ding!

I am indebted to DJ Darlison and FM-JJ in Fortaleza for their further guidance through the choppy waters (pun intended) of the Mãe da Água (Water Mother) that is Nereci and the pantheon in which she belongs. You can hear Darlison talking about his religion at the end of this episode of my Hefty Tomatoes podcast (he also introduced me to some good tunes too). 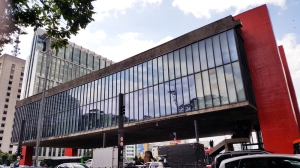 Whilst in Sao Paolo I visited the Museu de Arte de São Paulo (or MASP – pronounced more like ‘maspi’) and I particularly enjoyed an exhibition entitled Afro-Atlantic Histories. Found on the first floor of the weird building that is the city’s most famous museum (think a box on stilts), this was a large collection presenting some 450 works by 214 artists. The art spanned five hundred years from the 16th to the 21st centuries and attempted to focus on what French ethnographer Pierre Verger described as the ‘ebbs and flows’ among Africa, the Americas, the Caribbean and Europe. My native Liverpool had a dirty hand in the grim reality of that poetic phrase.

It’s apt that such a display would be in São Paulo, however, as somewhere in the region of 46% of the 11 million Africans forced into slavery were brought to Brazil. Think about that figure for a minute – five million people dragged across the Atlantic to one country alone. It is perhaps telling that Brazil was one of the last places to abolish the barbaric ownership of slaves in just 1888. That’s less than thirty years before my gran was born. This is by no means the distant past and the legacy of the ‘trade’ is still felt keenly across the country and played out in its daily politics. By contrast, and much like the United States in the Americas north of the equator, there is also a positive and rich cultural inheritance bequeathed by Africa. This was also celebrated within Afro-Atlantic Histories.

The title in Portuguese is actually Histórias Afro-Atlânticas and it should be noted for those who don’t speak the language that ‘histórias’ in Portuguese means both stories (possibly fictional) and histories (real). This gives the title a broader meaning than can be conveyed in its English translation. In addition, rather than being organised chronologically, the works were grouped into eight categories (two being hosted elsewhere at the Insituto Tomie Ohtake) that might better reflect these histórias. The six sections at MASP were: Maps and Margins, Everyday Lives, Rites and Rhythms, Portraits, Afro-Atlantic Modernisms, Routes and Trances: Africas, Jamaica and Bahia.

I was pleased to find that my new mate Yemanjá was relatively well represented in one section (I’m not sure which, but if I had to guess I might say Rites and Rhythms). Having learnt more about her so recently, it was nice to see visual representations and put a face, or faces, to the name. I’m no art critic, as you’ll see, but some examples featuring Yemanjá are below, along with a few other pieces that caught my eye.

(N.B. Portuguese titles don’t typically capitalise the way English ones do. There is a gallery at the end.)

Iemanjá segurando os seios [Iemanjá Holding her Breasts] by Maria Auxiliadora was painted in 1974 when the artist was 39 years old. It’s a relief work, with three dimensional nose, cupped breasts and raised embroidery. Though the hands holding prominent boobs chime with many representations and her status as mother of the Orixa, it seems the most striking work on show because Iemanjá is removed from her native water and is seen running or dancing before a stark bright brick wall. Perhaps it grounds her in the city – it was after all painted in the vast metropolis of Sao Paolo rather than the artists hometown in Minas Gerais.

Yemanjá’s short curly hair here reminds me of my mate Danilla’s current cut – don’t tell Danilla but Yemanjá is better dressed, her bright blue threads contrasting with the pink of the brickwork. This light blue is likely a nod to her heavy association with Mary, the mother of Jesus in Christianity, with whom she is loosely syncretised. Contrary to the more common representations of Iemanjá as white and having long straight hair, Auxiliadora shows her to be a woman of colour, restoring the black history erased by the influence of Catholicism and colonialism. 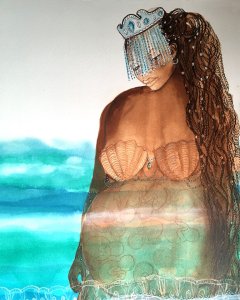 One of the more recent pieces was Oxum by Edsoleda Santos. A 2017 watercolour from a series of books based on the Orixas, Oxum shows Iemanjá standing in the sea, heavily pregnant with the peoples of the world – or possibly the other Orixas (there are ten I can see here but I’m aware of eleven other than her), their foetal forms just about visible.

I’ve caught glimpses of the art from the rest of Santos’s books and it looks captivating. The colour palette seems to change to reflect the nature of the spirit in each story. Santos’s representation has more than a touch of the mermaid about it, replete with customary clamshell bra (been meaning to ask – are they uncomfortable?), though this is more a nod to the deity Iara worshipped by the indigenous people of Brazil than a sexualised underage nineties Disney princess. Sorry Ariel, for so many things.

René Portocarrero’s Yemanjá is earlier than the above two, dating from Cuba in 1964, and is more connected to the central American take on Yoruba called Santería. It shows a strong black woman, decorated in a some form of headdress (possibly an adê, one of the sacred vestments of Orisha worship also found in Santos’s mer-Nereci). The paint is thick and bold, the yellow, orange and red markings suck your eyes into the deep blues of the background and the black of the skin, as if she was calling you into the depths of the ocean. I better look away or I’ll be lost forever.

Let’s turn our attention away from the sea queen. Over to our left we can see a colourful painting of a market place by Carybé, an Argentine who made the city of Salvador his home. The imaginatively titled Feira (Market) is a heavily stylised, almost cartoon-ish piece from the forties. It’s a picturesque Bahia seaside scene with brightly rendered houses, people coming and going, stopping to chat and buying things form the ‘Deus e as Aguas’ stall. Wait, ‘god and the waters’? That’s a mermaid symbol! Iemanjá is following us! On to the next section quicly!

Why hello, this next one looks almost like the oil paintings of green and pleasant British landscapes that are so common in the galleries back home. Indeed on closer inspection it dates from 1827 and is by Charles Landseer, of London fame. Entitled Vista do Pão de Açúcar tomada da estrada do Silvestre (View of the Sugar Loaf from Silvestre Road) it does just what it says on the tin. For the uninitiated, Sugarloaf is one of several monolithic granite and quartz mountains that pop up off the coast of Rio. You can go up it in a cable car and get lovely views. Mountain is a bit grandiose and the Swiss or Indians would have a fit at the thought of it. More of a rocky peak, but you get the gist. Landseer’s painting shows it in quieter, more rural times, before the rampant spread of urbanisation. Our Charlie’s oil and canvas was perhaps the thin end of the selfie-stick wielding tourist wedge.

Fast forward 109 years to 1938 and we find Heitor dos Prazeres’s Samba. It’s simple and cheerful, showing a small group feeling the beat of a tambourine. Abba got nothing on these four. They are presumably about to go to Carnival, the famous street festival found all around the black Atlantic and whose roots are entwined with religious rituals such as those of Candomblé, Macumba and Umbanda. Where they go,the Orisha are not far behind, so let’s keep moving before you-know-who catches us dawdling.

A couple more musically themed works that caught my attention were Jaime Colson’s Merengue, repping for the Domincan Republic, and Candombe by Pedro Figari. The former is another heavily stylised scene and I love it, even though it has the air of carved static statues, posing for eternity in a barn like a nativity, but with better beats. The latter shows the Afro-Uruguayan practice of music and theatre known as Candombe (not to be confused with the aforementioned Candomblé, come on, keep up!). This was a musicality forged around the Plata river, brought by enslaved people from East and Equatorial Africa. At its heart were the chico, repique and piano atabaque drums and, though a distinct form in a new century, its rhythms can be traced back across the ocean. Repressed by the colonialists, it remained outlawed till the mid-twentieth century thanks to the structural racism that still dogs the continent. The painting shows an act of cultural resistance as the people throw shapes at an illegal rave. 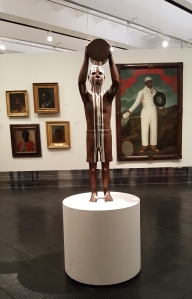 Impossible to ignore, Amnésia is one of the most powerful works of the exhibition. A bronze statue of a black boy pouring white paint over himself, Flavio Cerqueira’s 2015 piece dominates the room. Rather than showing some sort of Jacksonesque craving to be white, it reflects the process by which eighteenth century immigration gradually ‘whitened’ black Brazilians and shifted the demographics of the population. The tin is nearly empty, however, showing that the end of the process draws near. The Bronze shines through, resilient to the change, the white cover-up will ultimately fail. As a choice of material, the metal draws on a rich tradition of sculpture and serves as a timely reminder that history cannot be forgotten.

Nor could the exhibition be forgotten; Afro-Atlantic Histories was one of my most memorable Sao Paolo moments. I bought three posters (though none of the above) and had to carry them home on the plane along with a stack of records, including the one that brought me to the queen of the sea. As we took off, I’m sure I caught sight of Nereci swimming along under the silver bird as it headed back across the Atlantic. 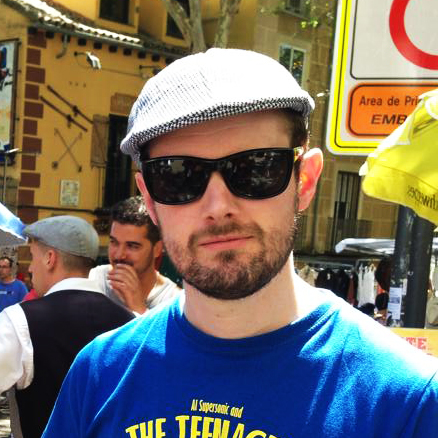